MFNAC: We all just need to find the right arena to shine 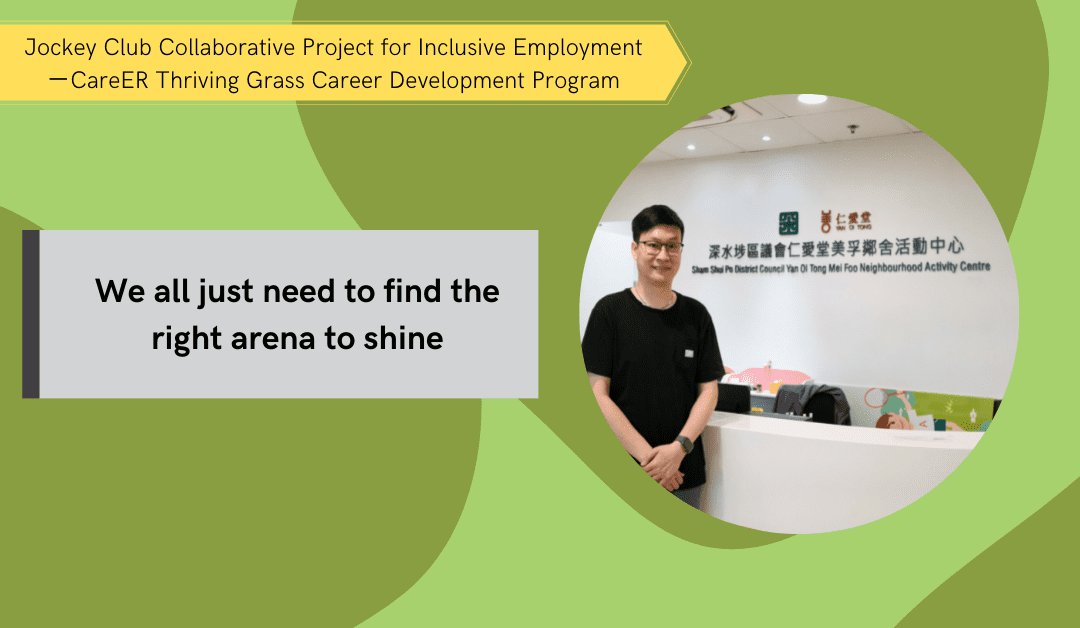 In 2013, the Hong Kong Chief Executive announced in the 2013 Policy Address under its Signature Project Scheme to provide HK$100 million funding for each of Hong Kong’s 18 District Councils to implement projects to address local needs. Consequently, the Sham Shui Po District Council Yan Oi Tong Mei Foo Neighbourhood Activity Centre (MFNAC) was built in 2018, as one of the community centres established in the Sham Shui Po district under the Signature Project Scheme. MFNAC is currently operated by charitable organization Yan Oi Tong, with multi-purpose rooms holding various activities and classes for residents to enrich their community lives.

According to Hong Kong government figures, Mei Foo is a densely populated neighbourhood comprising people of all ages, backgrounds, and races. MFNAC mission is to facilitate and enhance local community engagement, Yan Oi Tong started to incorporate diversity and inclusion (D&I) in its recreational and leisure activity programs in 2018, due to increasing demand from the local community.

At first, MFNAC introduced two newly emerging sports into the centre: pickleball and flipball. Like tennis and badminton, both ball games call for two to six players, but they require less physical strength from the players so people from all ages and skill levels may be included. Gradually through word-of-mouth, residents with physical disabilities expressed their interests in joining the games too.

“We were a little hesitant at the beginning on how to include people with physical disabilities to play on a level playing ground. But it turns out to be not what we have imagined at all. We now have a sports coach with physical disabilities that plays even better than other players. We shouldn’t overthink things. It was just our misconception of people with disabilities, but nothing more.” Yeung Yu-ting, Supervisor at Sham Shui Po District Council Yan Oi Tong Mei Foo Neighbourhood Activity Centre, says.

From that point onwards, mutual understanding and respect were established between MFNAC and the various local communities. The centre later conducted trial workshops to let regular players sit in wheelchairs to see and play the games from their angles.

In summer 2021, MFNAC achieved another milestone to further promote D&I, through working with CareER for the first time, and hired an intern with special education needs (SENs) in its centre through Jockey Club Collaborative Project for Inclusive Employment – CareER Thriving Grass Career Development Program.

“Honestly, we just treated her as another new staff member coming onboard, instead of someone with a special condition. She is just a human being after all. Even the children and parents at our classes were not aware of her so-called ‘differences’.” Yeung says.

Working closely with the intern with SENs allowed MFNAC’s team to have more open-hearted conversations with one another, and really put themselves in others’ shoes. More importantly, the experience improved the team’s workflow and reminded everyone that communications must be done both ways.

“Let go of your assumptions and identity labels to people with disabilities and SENs. These labels do not define who they really are.” Yeung adds. “Every one of us are unique, we all just need to find the right arena to shine.”

To MFNAC, it seems that the power of empathy, active listening, and treating everyone with respect as equals are its secret weapons to achieving an inclusive society in Hong Kong after all.

Font Resize
Contrast
Accessibility by WAH
SENergyDisability InclusionMFNAC: We all just need to find the right arena to shine