Manulife: Diversity, Equity and Inclusion as a driving force for corporate innovations Headquartered in Toronto, Canada, Manulife is a multinational insurance company with strong Canadian values and ethics deeply rooted in its corporate DNA. From Manulife’s standpoint, Diversity, Equity and Inclusion (DEI) are complex issues that need to be tackled holistically, and driving real change requires a long-term commitment from top management, ongoing efforts from its staff and members, and a thorough understanding of the needs of its local communities.

Having approximately 37,000 employees worldwide, out of which 19,000 are based in Asia, Manulife officially started its DEI journey in 2016, and identified that raising awareness, storytelling and changing perceptions are crucial to its DEI strategy’s success. To tackle this, Manulife launched a range of mandatory programs including ‘Unconscious Bias Training’ program in 2018 and a ‘Global Afternoon of Reflection and Learning’ in summer 2021, with the goals to end discrimination at work while creating a safe, inclusive space for all employees to speak up and become advocates on DEI issues.

In 2020, Manulife announced globally its commitment to invest a $3.5 million budget to accelerate its internal and external DEI efforts, by providing enhanced employees’ training and extensive support to under-represented communities and talents worldwide. With more financial resources and support from the senior level, a dedicated global DEI team representing Canada, U.S. and Asia was officially formed in mid-2020 to ensure the empowerment and inclusion of all kinds of employees with different beliefs, backgrounds, sexual orientation, abilities and disabilities at Manulife.

In the Canadian company’s point of view, inclusion means inclusion for all, and having a morally just corporate value and culture directly correlates to better business outcomes, as the journey of DEI acts as a catalyst for Manulife to evaluate, review and understand its stakeholders better, providing better solutions for its customers, as well as winning the hearts of its employees. 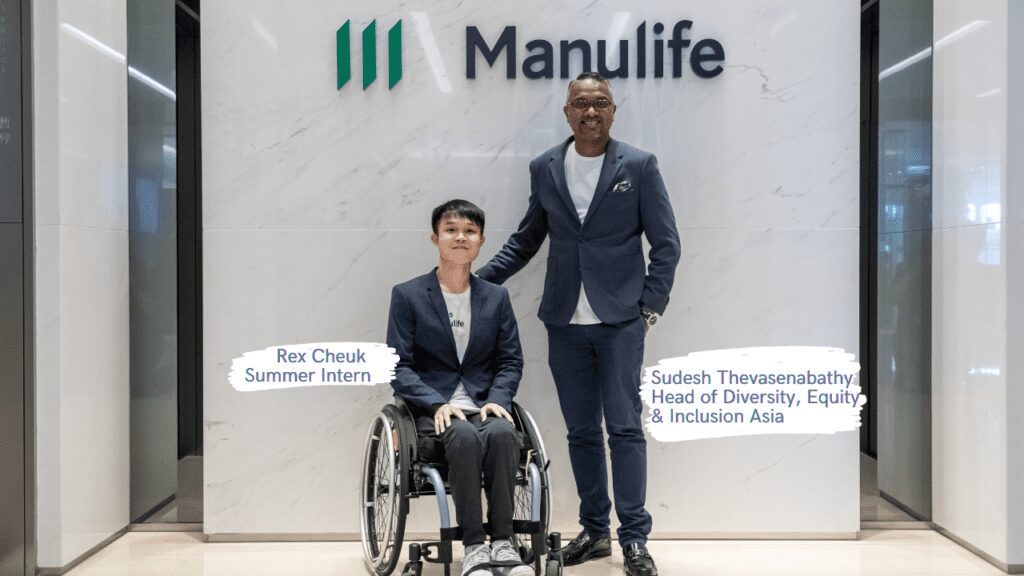 Rex (in the left) is one of the interns who has been placed at Manulife through the Thriving Grass Program in summer 2021.

Before onboarding the disabled interns, Manulife made various physical adjustments in its Hong Kong office from setting up raising tables, purchasing accessibility tools, to doing a walkabout in its entire office building to ensure a welcoming and conducive environment. The team also conducted a workplace sensitivity training in advance, so that the behavioural environment in the office is also ready.

To Manulife, hiring candidates with disabilities may seem difficult in the beginning, but it is definitely a logical decision and the right thing to do.

“We in Hong Kong are finding it hard to find people to join our workforce for various reasons, and here you have an untapped community. You will be surprised they might end up being more loyal than fully able employees. At least in our HR space, we are very open and we always offer a differently-able hire as an option to the hiring manager, and let the hiring manager to look at the skill sets. It is difficult, but if you put in more effort, it will be very meaningful.” Thevasenabathy says.

More recently, Manulife joined forces with Hyatt and Herbert Smith Freehills in Hong Kong to launch a ‘Diversity Champion Internship Program’, a one-of-a-kind DEI internship rotation program offering one-week job placement in each company. This year, six candidates from diverse backgrounds: ethnic minorities, disabilities and LGBT; were hired and had an early taste of working in the insurance, hospitality and legal service industries.

“We have decided to continue this program going forward. This is what corporates can do, and the least that you can do. It did not cost much either, just using resources you already have. We are now looking to extend this program further to see if any other corporations would be interested to join us to do this, and see how it goes. It worked out for us really well and we loved it.” Thevasenabathy adds.

In Hong Kong and Asia, disability inclusion may still be at its nascent stage, but it is with corporate innovations, partnerships and collaborations between like-minded corporations that will move and shake our society to become a better world for all in the foreseeable future.