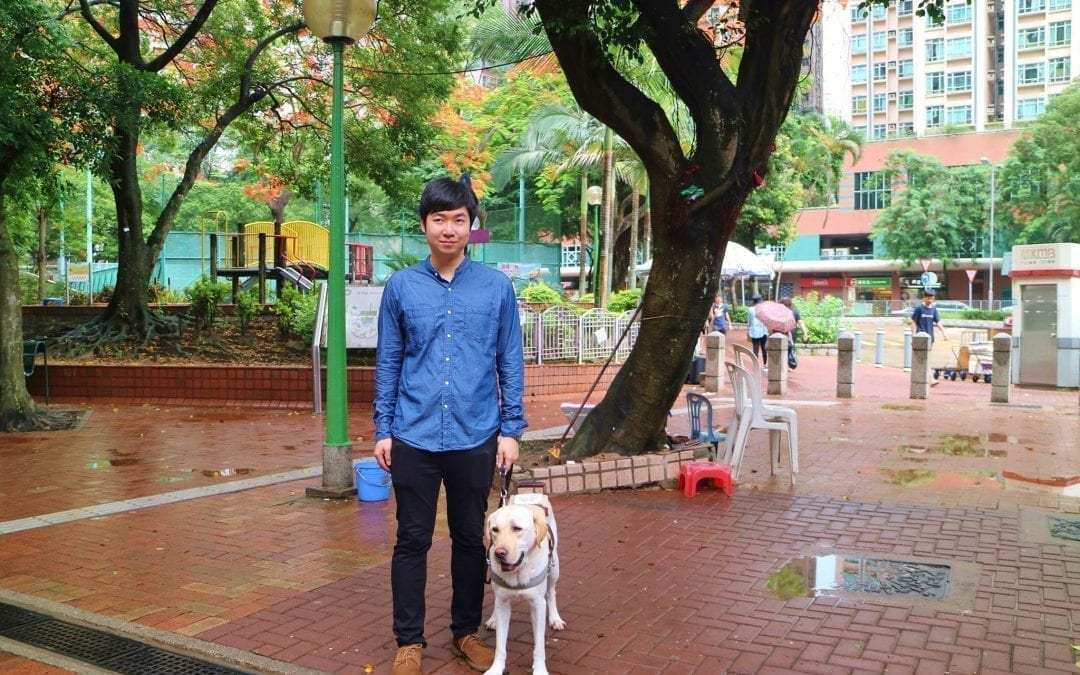 I am Walter. My story is of a public housing boy with visual impairment. I traveled the world starting from my roots in Fanling. I will not mind the deterioration of my eye sight and will only try my best to help others.

When I was three, I had congenital retinal degeneration. My eyes only have thirty percent vision. The doctor, at the time, explained that the growth of my congenital retinal cells was abnormal. It will mainly affect my sensitivity towards light. In future, my thirty percent vision would deteriorate to complete blindness. Starting from kindergarten till primary school, I did not like myself because when I was three, I already had to wear glasses.

Fortunately, the doctor often encouraged my mother. He believes that I can do many things. He did not suggest that I attend a special needs school. Consequently, I can attend a mainstream school. Due to my visual problems, I lacked self-confidence and was not able to blend in with the crowd since kindergarten through to primary school. When I was in Primary One and Primary Two, I even feared going to school.
I was raised in a good family. Although I had visual impairment since I was young and until I was grown up, my family did not make me feel any different from the others. They wanted me to live a normal life and would not pay special attention to me. My mother would let my brother take me to the soccer pitch to play. When I was in Primary Two or Three, I even went to a swimming club myself. Although I was very frightened by these experiences at the time, I slowly understood what it meant by survival of the fittest.

I am very grateful because I was enrolled into a Band 3 co-educational school. I began to focus on studying. I was very pro-active when it came to learning different things. My grades became increasingly better. I was also socially-adept. Slowly, I nurtured my self-confidence. When I got into Form 5, my grades were the best in the class.

When I reached Form 6, I became the club President and Prefect. My grades were good and I could manage sports class. I was greatly self-confident at that time. But when I carried this mentality to the Finance program of the Chinese University of Hong Kong, I felt a mountain on my back. There was a great gap between what I was able to do and with my expectations. During university, I experienced many things. It is because the university has not accepted someone with visual impairment for around six to seven years. Therefore, I had to run all over the place from department to department in the university to find support e.g. the examination team, the university departments and the finance department as well as, my campus. I had to roll with the punches with each place in order to fight for something for myself. It also took one year to purchase a special needs equipment to enable me to see what was on the lecture screen. From my observation, I found that my experiences in secondary school were good. It is because there were lots of external factors and people who helped me. I felt humbled at once.

During the first summer break of my university life in 2009, I had to travel to Germany to attend summer class because I minored in German. I was able to work as an intern in the Dialogue in the Dark exhibition in Frankfurt. In the second year of summer break, I worked in Swiss bank, Goldman Sachs, as an intern. I was filled with self-confidence during that period.

I hope to learn more so that I can help those with disabilities to find work. After I graduated from university, although my grades were great and I had experience working in a bank, it took great effort before I was able to find a job with a three-month contract. It did not become a permanent full-time job until six months later. I once underwent fine education and solid work experience but it was still so difficult to find a job. I wondered how friends with disabilities around me can find a job.

In 2013, I began to conceptualize a student association for highly educated disabled person, a school alumni and voluntary group platform. I then met my two current partners. We carried the same philosophy and that’s why we began to work. In 2014, we were able to register our organization as a charity group called CareER. We started our work beginning from students. I also contacted employers that I have interned with as well as, a Hong Kong-based Australian legal firm. In the beginning, the firm gave our members the first internship work. It later introduced us to an Australian telecommunications company. From the two firms that employed four persons with disabilities it has later, in 2016, evolved into twenty-nine companies providing 50 job vacancies to our highly educated persons with disabilities. Our charity organization not only supports those with visual impairment but includes those with handicaps, listening impairment, those with special educational need, autistic individuals, those with reading-writing coordination problems as well as, persons with mental issues. We will help them to find work. Right now, we have more than 180 members.

I have always had a full-time job but found that it has accelerated the deterioration of my eyes. Starting from last year, I began to understand that the charity organization, my career and my eyesight cannot be juggled at once. In the end, I chose the charity organization work. I hope the rest of my vision can contribute to my dreams. I hope to serve educated persons with disabilities to find work.

Today, I have found this public housing estate area as my photoshoot background because I hope friends who do not know me will learn that I come from a normal family. My father works in a small factory and my mother is a housewife. I do not come from an affluent family. I lived in Sha Kok Estate and then moved to Wah Ming Estate of Fanling. Without support from able people across the society and with insufficient financial funding, I used my connections from my previous work and voluntary experiences as well as, the help from friendly volunteers to slowly develop the platform for this organization. I used what I learned from my prior work experience to concentrate on the organization and share with those who have disabilities. I hope to not just care for myself and leave this disability circle but rather, focus on helping others to find their way.